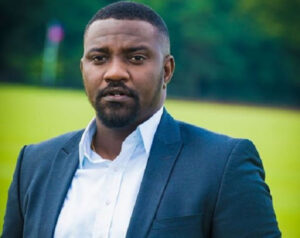 John Dumelo is a prolific Ghanaian actor, farmer, and politician. He was born and bred in Ghana and is renowned for playing the lead role in The Maidens and other movies.

John Dumelo was born on 3rd February 1984 in Accra to Mr. John Dumelo (father) and Mrs. Antoinette Dumelo (mother). Born and raised in Accra, Ghana, John had his primary, secondary and tertiary education in Ghana. He attended Christ the King School in Accra for his basic education after which he proceeded to Achimota Secondary School where he joined the Drama Club of the school and holds a degree in civil engineering from the Kwame Nkrumah University of Science. He started his acting career professionally many years ago and has melted the hearts of many fans throughout his entire career. He has been actively involved in the Ghanian movie industry and maintained his giant strides both locally and on the foreign scene. His passion for acting started at a very tender age making him popular once he hit the TV screens. John discovered at an early age that one of the best ways to make money is through investing in one’s talent and this, in turn, has taken him from obscurity to limelight.

As He grew up, John’s passion for acting grew strongly. He started as a member of the Drama Club of Achimota Secondary School but did not attend any school of acting afterward. Prior to this, John was discovered by a movie producing company named GAMA Film Company at the age of seven while he was at Christ the King School in Accra and was eventually given a role in the movie titled Baby Thief in 1991 though he started acting in the early 1990s.

John went to feature in more than 100 movies in Ghana and Africa at large with stars like Ramsey Noah, Omotola Jalade Ekeinde, Jackie Appiah & Majid Michel among others. His ability to perfectly fit into any role assigned him has made him one of the most successful Ghanaian actors as of today.

John Dumelo’s acting career is filled with several achievements and he has featured in many movies, part of which include;

A Night with Her

End of Mirror of Life

End of the Maidens

If God Be for Us

Letters to my Mother

Tales Of Nazir – The Movie”

The King is Mine

To Love a Prince

One Night in Vegas

One in a Million among many others.

John Dumelo has won several meritorious awards in his acting career and has also received several notable nominations for them. These include:

In 2010 Best of Nollywood Awards, he got a nomination for the Best Actor in a Leading Role

In the 2010 Africa Movie Academy Awards, he was nominated as one of the Most Promising Actor

At the 2011 Afro Australian Movies and Music Awards, he won African Most Outstanding Actor

The 2012 Ghana Movie Awards where he was nominated as the Best Actor in a Lead role.

John Dumelo currently is married to his heartthrob, Gifty Mawunya Nkornu. The pair got married at a grand wedding at Royal Senchi Resort in Akosombo. The union is blessed with a handsome baby boy who was born on 16 October 2018 and named John Dumelo Jnr. after his father.

John Dumelo is a businessman aside from being an actor. In 2012, he launched his clothing line which is named J.Melo. The award-winning actor is also known to be involved in both Crop and Animal farming.

John Dumelo’s versatility is also seen when he ventured into Politics. He was one of the most influential and outstanding celebrities who were seen campaigning for the NDC Government. It was reported that as a form of gratitude for his engagement and patriotism to the Party, he was called and appointed by the former president of Ghana H.E John Dramani Mahama, to serve his Party as a Director of Operations for a pro-NDC youth group for the National Democratic Congress (NDC).

However, on the 19th of July 2019, he picked up a nomination form to contest in the NDC primaries as a parliamentary candidate. On August 24, 2019, he won the NDC parliamentary primaries to represent the NDC in Ayawaso West Wougon Constituency in the 2020 General Elections and successfully launched his campaign manifesto for the 2020 Election on Sunday 18 October 2020 promising to commit half of his salary to youth development in the constituency if voted for though he lost the parliamentary elections to the New Patriotic Party (NPP) incumbent Lydia Alhassan for the Ayawaso West Wuogon Constituency.

John Demelo is undoubtedly one of the wealthiest actors in Ghana with an estimated net worth of $1,000,000 as of 2021.