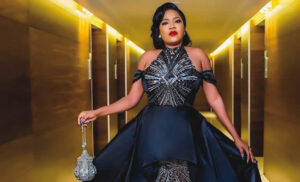 Toyin Abraham is a prolific and versatile Nigerian actress and filmmaker who is known for her outstanding performance and versatility in movies. She is undoubtedly one of the young and famous filmmakers and film producers in Nigeria. She began her acting career in 2003 after meeting with Bukky Wright, a veteran actress who came to shoot a movie in Ibadan at that time. She eventually featured in that movie which was titled “Dugbe Dugbe”.

Toyin continued to feature in the best of Nollywood movies both in English and Yoruba, though she started in the latter and also ventured into movie production afterward. She is widely known for her comic roles in films, especially with her self-produced blockbuster movie Alakada Reloaded. Aside from acting, She is also an entrepreneur who recently ventured into the sales of herbal products for women with infertility issues.

Toyin’s creativity is beyond expression. Her ability to interpret roles given to her by directors has made her one of the most respected actresses in Nollywood.

Toyin Abraham was born on September 5, 1984, in Auchi, Edo State, Nigeria. She was formerly known as Olutoyin Aimakhu before publicly announcing her change of name as Toyin Abraham. She is the last of six children. She had to peddle to support her family due to her poor background.  She grew up in Edo state where she had her primary and secondary education though she later moved to Ibadan.

She attended Oba Kenzo Nursery and Primary School, Benin. After her father retired, the entire family moved to Ibadan where she spent most of her early life. Getting to Ibadan, Toyin started from Queen’s Staff School which was then called St. Annes School, Ibadan. Afterward, she proceeded to the Iree Polytechnic in Osun State where she obtained a National Diploma in Business Studies. She furthered her education by proceeding to Olabisi Onabanjo University where she bagged a degree in Philosophy before returning to Iree Polytechnic to obtain a Higher National Diploma in Marketing.

Toyin Abraham’s acting career kick-started in 2003 after featuring in a movie produced by Bukky Wright, an ace Nigerian actress. The movie which featured Toyin was titled “Dugbe Dugbe”. She would subsequently begin to feature in other films until she rose to stardom.

Growing in the movie industry, Toyin started producing her movies. Alakada was the first movie produced by her and there are plans by the versatile actress to produce Alakada Reloaded.

Toyin Abraham is today one of the biggest brands in the Nigerian movie industry. She affirmed that starring in Okafor’s Law and working with movie director, Omoni Oboli was highly instrumental to her brand. She is not slowing down anytime soon as she has been consistent and is always making a name for herself. Toyin has worked with notable household names in Nollywood such as Kunle Afolayan, Tonto Dikeh, Jackie Appiah, Bolanle Ninalowo, Mercy Aigbe, Iyabo Ojo among others.

HER FAMILY, PARENTS, AND SIBLINGS

Toyin Abraham was born into a Christian family of six and raised by godly parents. She is the last born of the family but took it upon herself to cater for her family even to the extent of hawking to make ends meet.

After a failed relationship with Adeniyi Johnson who is also her colleague, Toyin Abraham is presently married to her heartthrob, Kolawole Adeyemi, and the marriage is blessed with a handsome baby boy named Ire.

Toyin Abraham has won several awards both locally and on the international stage. Awards won by her include;

Best Actress in a Supporting Role ‘Diamond in the Sky’, English, Best of Nollywood, 2019

Some of the awards in her possession also include;

Toyin Abraham is undoubtedly one of the most successful actresses in Nigeria if not in Africa. She stands tall among other female entertainers with significantly great wealth to her name with a net worth of approximately $500,000 US dollars.

Toyin Abraham has featured in and produced quite a number of movies and has earned notable recognition in the Nigerian movie industry. Her ability to creatively interpret any role given to her makes her one of the most promising actresses in Nigeria. Some of the movies she has featured in include;

Wives on Strike: The Revolution, 2017

Elevator Baby, 2019 among numerous others.`2

Toyin Abraham officially launched her herbal medicine business in October 2019 with the brand name Toyin Herbal, which is a subsidiary of Toyin Abraham Company. This came up shortly after revealing how challenging her journey to motherhood was.

After her discovery, a lot of people have abandoned the traditional remedies which served their forefathers during crises of barrenness. They have rather resorted to using modern inventions which are quite expensive and probably inimical to their health. Owing to this, she launched the Female Fertility Booster (FFB), a product that enhances childbearing and conception.

Toyin Abraham is a phenomenal celebrity influencer, she provides room for interaction with her fans through Instagram, Facebook, Twitter, Youtube among others. She is a versatile individual with such an active life on various social media platforms. One of her most active social media accounts is her Instagram account @Toyin_Abraham where she can be interacted with by her numerous fans.