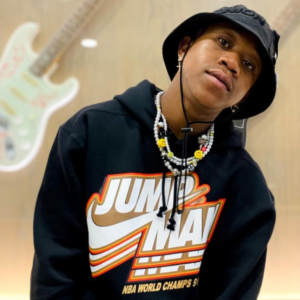 Young Stunna (born Sandile Msimango) is a versatile fast-rising Amapiano singer and songwriter from South Africa. The fast-rising music star has been actively involved in the South African music industry and maintained his giant strides both locally and on the foreign scene. His passion for singing started at a very tender age making him popular once he hit the national stage. Stunna discovered at an early age that one of the best ways to make money is through investing in one’s talent and this, in turn, has taken him from obscurity to limelight.

Stunna is indeed young at heart being active on social media with a huge fan base. His Instagram handle @youngstunna_rsa is a platform through which his fans can reach out to him.

Young Stunna was born on 17th November 1997 in Daveyton in the Ekurhuleni Metropolitan Municipality of Gauteng in South Africa. He grew up in a Christian background where church services were held at their home every Sunday, this developed the interest in him to join the choir where he explored his musical talent.

Although his growth from Daveyton was tough, Stunna focused on his education at the time as he learned so much from school and applied some of them in real life. The ecumenical teaching impacted in him by his Christian parents also helped him to remain humane and of high morals despite his fast-rising fame.

Stunna’s mom also influenced his interest and growth in music, she is a vocalist who grew up listening to Brenda Fosa while his father was into Kwaito at the time.

Stunna had his education in South Africa, he studied at Jephtha Comprehensive Secondary School where he wrote his first song and developed his talents by participating in different talent hunt shows and contests after which he proceeded to Coventry University where furthered his education studying Mechanical Engineering.

Young Stunna started his career at a very tender age; he recorded his first song at the age of 5 when he was in primary school. He started writing his songs in 2012 but gained interest in Amapiano after listening to some other amapiano artists such as Maphorisa, Mpura, Mphela, and most importantly Focalistic, who the singer described as his inspiration.

Stunna was part of a 7-man music group called Mighty Kings in 2015 making waves and releasing hot jams. He started as a hip-hop artist before switching to the Amapiano music genre and has since been keeping South Africans on their feet, vibing to his great songs.

Aside from being a singer,  Stunna is a poet; this makes him read a lot of novels, which helped him to understand the usage of English in his rap, which he combined with his street experience.

Little is known about Stunna’s personal life as he has always kept it from the eye of the public.

Young Stunna is undoubtedly a great musical act that focuses on becoming one of the best in Africa. Though young, Young Stunner has accrued wealth to himself as one of the wealthiest fast-rising music artists in South Africa with an estimated net worth of $100,000 as of 2021.