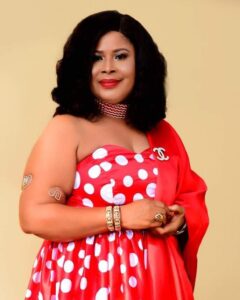 Ngozi Evuka Eze is a versatile Multi-Award Winning Actress/Aspiring Producer businesswoman and entrepreneur. She is one of the leading and most sought-after actresses in Nigeria. Ngozi has graced the screen for some years and has won notable awards owing to her versatility and impeccable personality. She fits perfectly into every role given to her and this has made her attract numerous fans and directors in the movie industry.

Ngozi got inspired to be an actress having watched some veteran Nollywood actors and actresses feature in movies many years ago. She holds a belief that anyone who would get to the top must be ready to pay the price. This is evident in Ngozi’s attitude to work.

Ngozi Evuka Eze was born on the 5th of September into a family of nine, She is the first child and the first daughter of her parents, the year of her birth is unknown. She hails from Isiala Ngwa North Local Government Area of Imo state where she had her primary and secondary education. She grew up with her family who played a prominent part in the discovery of her God-given talent.

Growing up in Imo state, Ngozi had her primary and secondary education there. No other information is made known about her education.

Although her career many years ago in Onitsha, Anambra state, she came into the limelight in 2002 after she starred in the movie “God Where Are You?” which was produced by Amaco investment. She has since starred in over 300 movies since she joined Nollywood. Aside from being an actress, Ngozi Evuka Eze is a civil servant who devotes her all to her duties and practice a high level of integrity over the years.

To say that Ngozi has become a Nollywood godmother is not a gainsaying, she has featured in over 400 movies and has helped the emergence of many fast-rising acts in Nollywood.

Ngozi has featured in quite a number of movies and has earned notable recognition in the Nigerian movie industry. Her ability to successfully interpret any role given to her makes her one of the most promising actresses in Nigeria. Some of the movies she has featured in include;

Ngozi is happily married to her heartthrob and the marriage is blessed with three kids; Chidera Eze, Ijeoma Eze, and Junior Eze. The beautiful pictures of her children could be seen on her Instagram account.

Ngozi Evukah Eze keeps striving hard and gives her best in all she does. She is active and relevant in the Nigerian movie industry and is undoubtedly one of the highest-paid and most influential actresses in Nigeria with an estimated net worth of $400,000 as of 2021.

Ngozi is indeed young at heart and provides room for interaction with her numerous fans on social media platforms. She can be reached through her active Instagram account handle@officialngozieze. She has over three hundred eighty thousand (383,000) Instagram followers.