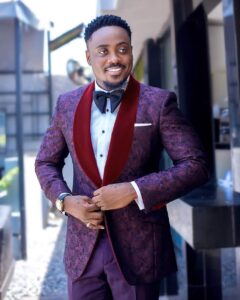 Toosweet Annan is a prolific Ghanaian actor, Afro Optimist, producer, television/radio host, A compere, and commercial model. He started his acting career professionally many years ago and has melted the hearts of many fans throughout his entire career. He has been actively involved in the Ghanaian movie industry and maintained his giant strides both locally and on the foreign scene. His passion for acting started at a very tender age making him popular once he hit the TV screens. Annan discovered at an early age that one of the best ways to make money is through investing in one’s talent and this, in turn, has taken him from obscurity to limelight. Aside from being an actor, Annan is also an entrepreneur who owns a popular pub known as Briefcase.

Annan is indeed young at heart being active on social media with a huge fan base. His Instagram  handle @toosweetannangh is a platform through which his fans can reach out to him

Toosweet Annan was born on August 25, 1985, in Ghana and was raised by his Nigerian mother. The fast-rising actor is the firstborn and has three siblings. He had his secondary education in Ghana and grew up with his siblings under the tutelage of their mother who is a Nigerian.

Annan holds two nationalities being a Nigerian-Ghanaian, he grew up nurturing and showcasing his talent whenever he had the opportunity to do so.

Annan had his education in Nungua Senior High School, where he studied visual arts after which he proceeded with his education, where he specialized in fine arts at the Ghanatta College of Arts.

Toosweet Annan started his career in 2008 after meeting with the executive producer of Peaces of Films, Joseph K. Serebour. He came into the limelight after featuring in the 2019 movie, P over D. A movie written and directed by Kwame Kyei Baffour and featured several other actors such as John Dumelo, Mimi Buari, Juliana Kinang-Wassan, Dcryme, and Grace Omaboe among others and since then has starred in many other movies, including local and international shows.

Toosweet Annan has won several meritorious awards in his acting career and has also received several notable nominations for them. These include:

Little is known about Annan’s personal life as he has always kept it from the eye of the public. Rumour has it that Annan is married to Semira Adams and the versatile hasn’t confirmed or denied it. However, has a lovely daughter called Novanna, with whom he recently made an Instagram video.

Toosweet is undoubtedly one of the wealthiest actors in Ghana with an estimated net worth of $700,000 as of 2021.