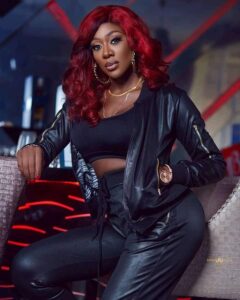 Lucy Ameh is a versatile Multi-Award Winning Actress/Aspiring Producer businesswoman and entrepreneur. She has graced the screen for many years and has won notable awards owing to her versatility and impeccable personality. She broke into the limelight In 2010 after starring in Ishaya Bako’s highly acclaimed ‘Braids on a Bald Head’, her career got a major boost due to her success in the movie and many producers took interest in her.

Lucy Ameh was born on the 12th of June, 1980. She hails from Opokwu LGA in Benue State but was born and bred in Kaduna State, Nigeria.  She grew up in Kaduna alongside her siblings and discovered her talent at a very tender age and was ecstatic to show it at any given opportunity. She started acting in her local church and gave her all to whatever role she was given. She referred to her mother as her number one fan who influenced the success of her chosen career.

Although Lucy started her career many years ago, she came into the limelight after she starred in the movie “Queen Amina of Zazzau”.  She has shown that she is a talented actress in the few movies that she has starred in although she hasn’t featured in so many Nollywood movies. Some of the movies she has featured in include O-town, Bariga sugar, braids on a bald head among others.

She has worked with notable Nollywood actors some of which include Ramsey Nouah, Nadia Buhari, Morris Chestnut, Eva Longoria among numerous others. Lucy starred in a hit movie “Beauty and the Beast” alongside award-winning actress, Nadia Buhari in 2007 and the success of the movie shot her to fame and recognition in Nollywood. She also participated in the TV reality show – “The Next Movie Star” where she made it to the house in the company of Uti Nwachukwu, Martha Ankoma, adesuwa among others.

Lucy Ameh has featured in quite a number of movies and has earned notable recognition in the Nigerian movie industry. Her ability to successfully interpret any role given to her makes her one of the most promising actresses in Nigeria. Some of the movies she has featured in include;

Learning curves among others.

Aside from being an actress, Lucy is also an event planner and an entrepreneur. She holds a strong belief in investing in the future. She aspires to be a producer in the future having studied producing as part of her course while at the NTA TV College, Jos, and have done some short documentaries and TV programs.

Little is known about Lucy Ameh’s personal life as she has always kept it from the eyes of the public. She is at the moment single and without a child.

Lucy keeps striving hard and gives her best to all she does. She is undoubtedly one of the highest-paid actresses in Nigeria with an estimated net worth of $400,000 as of 2021.

Lucy is indeed young at heart and provides room for interaction with her numerous fans on social media platforms. She can be reached through her active Instagram account handle @lucyamehlucious.