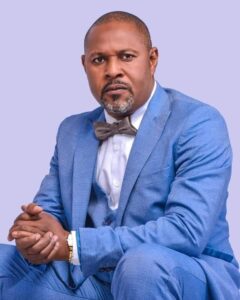 Saidi Kolawole Alabi Balogun popularly referred to as Saheed Balogun, and sometimes spelled Saidi is a veteran Nigerian actor, movie producer, and director. His creative way of delivery and action pose artistry earn him the nickname “James Bond” from his fans. Saheed Balogun is creative, versatile, and dynamic. He has been in the industry for more than three decades and he has stayed relevant in all these years. His official Instagram handle where his fans can keep up with him is @saidibalogun.

Saheed Balogun was born 5th of February, 1967, in Enugu State, South-east region of Nigeria but hails from Oyo State, southwestern Nigeria where he was raised and had his primary, secondary education. For his tertiary education. He went to Kwara State Polytechnic, Ilorin. There is no information about his parents and siblings as of when this article is written.

He started his acting career in 1978 when he hosted his first television program titled “Youth Today” on the Nigerian Television Authority (NTA). He produced his first film titled “City Girl” in 1989 and since then Balogun had been featured, produced, and directed several Nollywood movies.

Saheed Balogun has starred in over four hundred movies and TV shows, and listed are some of those movies and shows including the ones she produced;

Balogun’s legacy ranges from film production to directing and acting. He is an outstanding actor as he received the City People Movie Special Recognition Award for his excellent film-making

The Nollywood old timer is a hard-working and passionate person, he has become a household name thanks to his many talents. Balogun has been nominated for many awards, including:

Balogun, being a veteran actor, has played important roles in the success of several movies. He has made a tremendous amount of wealth due to this, his net worth is estimated to be $700,000. He has earned all these through his acting career and his many deals as a brand ambassador.

The well-known Nigerian actor has been married three times. His first marriage was to Sherifat, then Fathia Williams, and his third marriage was to Funke Tayo Sofoworan. He is a proud father of four children. His first two children, Zinnat and Jamal, are from his first marriage to Sherifat. Saheed Balogun then married veteran actress Fathia Balogun, now Fathia Williams, the two famous actors got married on September 7th, 2000 at the Ikorodu Marriage Registry, Lagos. Their union brought forth two children named Khalid and Aaliyah Balogun. In 2014 they announced their divorce to their fans.