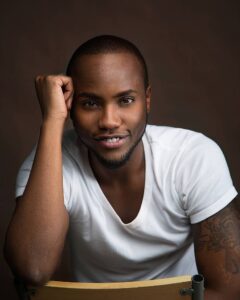 Nicholas Munene Mutuma is a  versatile Kenyan actor, Afro Optimist, producer, television/radio host, A compere, and commercial model. He started his acting career professionally in 2008. He has been actively involved in the Kenyan movie industry and maintained his giant strides both locally and on the foreign scene. He recorded his first success the same year when he broke out on Kenyan television starring in Tabasamu (Citizen TV). He has featured in numerous drama series which include Changes, MTV’s Shuga to mention a few.

Nick Mutuma is indeed young at heart being active on social media with a huge fan base. His Instagram  handle @nickmutuma is a platform through which his fans can reach out to him

Nick Mutuma hails from Meru in Kenya where he was born on 22nd September 1988 to a family of three children.  He grew up in Dar Es Salaam, alongside his sister, Sandra Mutuma who is now a lawyer, and her brother Neil Mutuma.

Nick Mutuma had his childhood in Dar Es Salaam,  Tanzania where he had his primary school education at The International School of Tanganyika. He proceeded to Braeside School (Nairobi) to obtain his high school certificate. He found his love for performing arts and often participated in school plays. He completed his tertiary education at The United States University (Nairobi) in 2010 where he obtained a Bachelors’s Degree in International Business Administration.

Nick Mutuma began his acting career at a very tender age. He had his break in the industry in 2008 when he got a cast “Luka” in a TV series on Kenyan television, his controversial role in the series was not without a mixed reaction from the public and also spurred him into the limelight. In the same year, he also featured in MNETs first Pan-African drama series Changes. Where he played the role of Richard as directed by Tosh Gitonga.

Mutuma starred in the Zuku series State House In 2014, which was directed by Wanuri Kahiu. He starred in the hit Nigerian online series ‘This Is It’ which was written and directed by Dolapo Adeleke and would receive an AMVCA Nomination 2018 for Best TV Series. Other movies and TV series he has featured in include ‘Disconnect’, ‘You Again’ to mention a few.

He was also employed by 1FMs event department in 2012 where briefly worked as the radio station’s promotion coordinator before receiving promotion as events manager after which he proceeded to work with 91.5 Hits.

Mutuma was recruited by African magic in 2014 as a TV Host. He anchored the premier Lifestyle TV show Mashariki Mix, a show which got ranked on Africaranking.com’s most-watched African TV shows in 2015.

Mutuma has been committedly in a relationship with Kenyan actress and entrepreneur, Bridget Shighadi and the relationship is blessed with a child named Dua whom she gave birth to while in the United States.

Aside from being a successful actor and TV Host, Mutuma is also a good singer, he recorded and released his first single which was titled “254 anthem” where he featured Lyra Aoko. The song celebrates all good things about Kenya and was welcomed with mixed reactions from his fans and critiques. He released a follow-up single titled “That Life” in 2014 on which he featured Cool Kid Taffie.

Nick Mutuma has accumulated significantly great wealth for himself with a net worth of approximately $6 Million (dollars).